Challenges to the current scheme

Rein is right that with our latest studies, especially his insightful look at the 1E3s, 1E4, and 2D, my scheme is showing inconsistent coverage. I have not had the time to determine times of use for the three 1E3s, but Rein's commemoratives work points to some of this usage. Because of my narrow focus (I am having problems completing the study and therefore have opted out of anything outside the series), all I can say is the following:

1. The 1E3s were used in quick succession on the 25c due to a rate change that made this stamp very common in 1942-43-44. Exactly when they were used, I have yet to determine. I don't have any qualms with giving the 1E3b a new number. I will suggest not to use 1E5, because there is a very rare small RA watermark I find on the 25c and 50c that I refer to as 1E5-its just like the 1E4 but with small RA and its a different paper altogether. Alternatively, we could make the 1E3b the only 1E3, and give new numbers to the 1E3a and 1E3c, which are scarcer. The 1E3a in particular is uncommon to very rare, depending on the value.

2. The 1E4 may look like the 2D, but these are two separate papers. The way to determine this difference is to compare the 5c 'Servicio Oficial' 2D and the 20c Large Format Cattle 2D with any of the 1E4s. The 2D paper is somewhat thick, cream, and opaque, while the 1E4 feels like a napkin and is bright white and thin. This block is a great example: 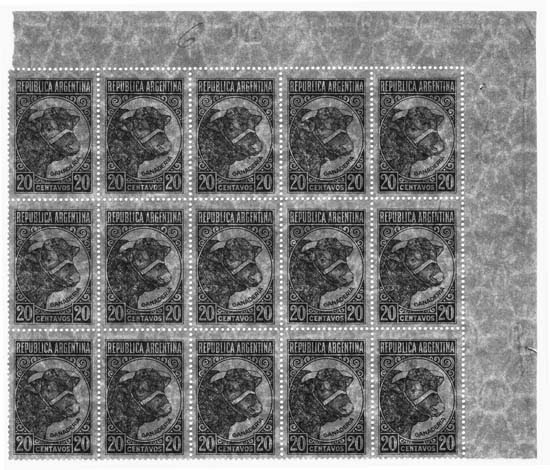 The 20cLC was issued in 1942, by which time all 1E4 stamps had been printed/exhausted.
Posted by Rubiera