Time to begin measuring rarity for the Departmentals

Which ones are the scarcest used/mint/on cover?

I only base rarity on what I have and that can lead to a poor assessment of rarity. In my case I rank rarity this way (1 is rarest):

Mi bias is for used and on cover only are useful to measure rarity since the mint ones are remainders. I have a notable example: my almost complete sheet (89 of 100) of the 30c MH 1E2 is for a stamp for which I only have a handful used, yet I have dozens of the 30c MH 1E1 used. I will post here once I get some responses from the Argentinean forum.

The above ranking is slightly different to the table below because I have additional stamps in a stock that I have not counted, and because I am 'not there yet' in measuring relative rarity correctly. Here are the stamps I have as singles and small multiples (four or less), used and mint. I have not counted the large number of remaindered blocks because these create a lop-sided count...I will think a bit more about this issue. 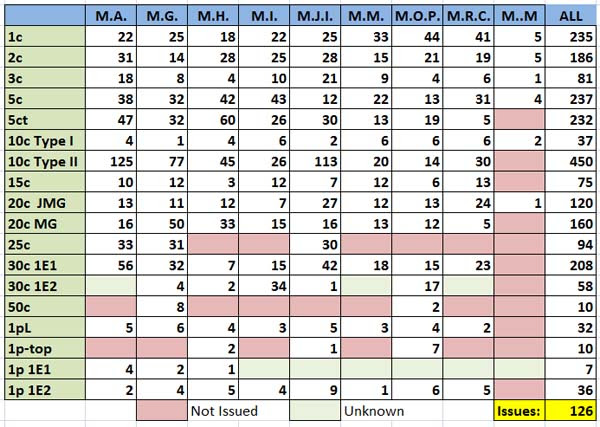